A downloadable game for Windows

VNAF: Halloween Edition for 2018 has been released!

Just in time for my favorite holiday, a very special Halloween Night is now available!

This is an early access build of a room-scale VR remake/remix of Five Nights at Freddy's, designed for the HTC Vive, with support for Oculus Rift with Touch and Windows Mixed Reality

You can find some gameplay videos tracking my development progress here: https://www.youtube.com/user/Dielji

You can also keep an eye on my twitter for teasers and release notifications: https://twitter.com/Dielji

This is a 100% free fan-remake; all credit for the original game goes to Scott Cawthon (http://scottgames.com/ and http://fnafworld.com/)  You won't fully appreciate this game unless you've played the original FNAF, so please go buy it and support Scott!

All art and gameplay is subject to change!  Many of the texture and audio assets used in this game came from the original FNAF, and credit for them goes to Scott and/or the folks Scott licensed them from, as appropriate.  Please don't sue me!

V 0.4.7.3 - Halloween 2018 Edition!  The game has been almost completely rebuilt from the ground up; this Halloween update is a good indication of things to come!

V 0.3.6 - Removed Halloween night (temporarily) and added Night 3.  There are quite a few more changes than that, but I'll let you guys find them on your own.  It starts with Night 2 unlocked; there *are* changes to Night 2, so it's worth giving it another playthrough.

V 0.3.5 - Adjustments have been made to make for a more pleasurable gameplay experience.

(Also it shouldn't stall at the Toreador scare anymore)

V 0.3.3 - A few minor things: swapped out the backstage music for something different, made it so you can hang up the phone, added a map toggle to the title screen, and started playing with physics and sound effects for some throwable objects.

V 0.3.2 - Quality of Life Update: Buttons are now much easier to press, a height slider has been added for folks who would like to play sitting down, and the difficulty has been tweaked such that the animatronics are much less likely to just hang outside your door forever.

V 0.3.1 - This release includes optimizations that should help the game run at a steadier, higher frame rate.  A few options have been made available from the title screen, including disabling reflections, which drastically improves performance.

V 0.3 - The Halloween Update!  The game now auto-calibrates the security office to match your room scale, with sliders to allow further tweaking, and the ability to pop on your HMD during calibration to make sure you can reach everything.  Nights 1 and 2 have been made more difficult, and a special extra-hard Halloween night has been added, with a few special features.  NOTE: This update might be a little resource-intensive!  It runs OK on my 1070, but might chug on lesser video cards.  If you are experiencing performance issues, sit tight, because V 0.3.1 will release soon and will address those issues!

V 0.2.1 - Added a startup menu with two major features.  The first allows you to tweak the play area to better match your room by using the sliders to shift things around.  The second is some basic Twitch integration; get an oauth token from Twitch and you can connect to your channel while streaming to see chat messages in the security room.

V 0.2 - Night 2 is now available after completing the first night!  All animatronics are active on Night 2.  This version also includes a significant number of bugfixes and gameplay tweaks, including completely reworking all of the animatronics and their jumpscares.

StickyPlease leave me feedback!
by Dielji · 18 posts
3y
CAN WE DOWNLOAD THE OLDER VERSIONS
by Night before dawn · 5 posts
88d
Oculus Quest Port?
by WoodEMeister · 4 posts
269d
DEVELOPER PLZ READ THIS (THIS IS ABOUT HELP WANTED)
by Dev0nR0cks · 1 post
3y
Possible ???
by Aichiro · 1 post
3y
let us download older versions
by Diverse boi · 4 posts
3y
Does it work for oculus as well?
by Jimmy Bob · 2 posts
4y
I love it! Plays perfectly with a WMR headset, btw!
by EmotionalTag · 1 post
4y
The reason its so difficult. (imo)
by monkeybutt22 · 1 post
4y
Post a new topicView all posts 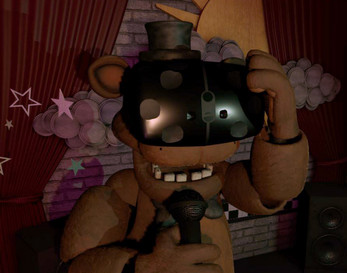